Hudson will be the technical sponsor of one of Malta’s leading football clubs – Valletta F.C. through its leading brands NIKE and Intersport franchise. The kits will be worn by the Club’s Men’s senior and minor teams, all members of the Academy and Club Officials, and eventually by the youth sector.

All the kits have been manufactured by the world’s leading brand NIKE.  The kit, made with NIKE Dri-FIT technology and lightweight breathable mesh on the back, is of the same quality as kits worn by international football teams sponsored by NIKE, such as England, France, Portugal, Holland, and Brazil as well as clubs such as Inter Milan, Barcelona, PSG, Chelsea, Athletico, Tottenham Hotspurs, Galatasaray and Liverpool amongst others.

“We are delighted to be teaming up our legendary football club, with the greatest sports brand NIKE. We look towards further collaboration, and to wear our gears sporting the Intersport and NIKE brands with pride” explains Valletta F.C. Alexander Fenech.

“As the representative and distributor of the world’s strongest sports brands, Hudson is equipped to provide the best in what the industry has to offer. We are therefore delighted to be drawing in Valletta F.C. as part of our portfolio of sponsored athletes and teams. We wish them all the best for their upcoming season!” explains Malta Country General Manager Ritianne Grech. 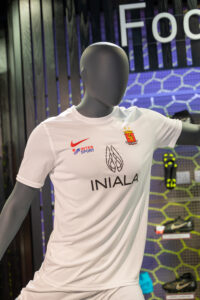 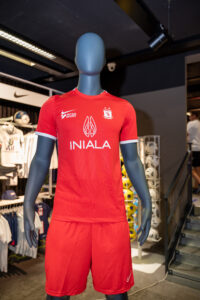 Valletta F.C. is based in Malta’s capital city and compete in the Maltese Premier League. The club was founded in 1943 after a merge of pre-existing teams: Valletta Prestons, Valletta St. Paul’s and Valletta United, the latter being a two-time league winner before WW2.

Hudson first sponsored Valletta F.C. in the season of 2000/1 when the club won a total of six domestic trophies in one season, an all-time record.

In total, the club has won 25 league titles, 14 FA Trophies and a record 13 Super Cups. It is one of Malta’s most successful and supported team. Valletta F.C. were the first Maltese football club to pass through the first round of the UEFA Champions League, as well as the first to reach the same competition’s third qualifying round.

Football was brought to Malta by the British during their occupation of the island and the first recorded Maltese football match took place in 1886, at the Ditch at Portes des Bombes in Valletta. The first ‘Valletta United Football Club’ was founded by local youngsters in 1903, which although low on supplies were enthusiastic enough to cut their white trousers into long shorts and tied their shirts brown and yellow – the club colours at the time. 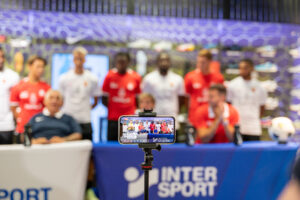 Hudson together with Intersport and NIKE, wish Valletta F.C. all the success in their upcoming games and look towards celebrating victories.